Press space to bank left and then press again to bank right, it alternates direction

Super relaxing and a real smart way to utilize the one button. This also might just be me with my terrible fine motor skills but I found it really hard haha. Maybe adding an arrow or some other indicator on the player that tells me which direction is next? The cacti are super cute and my main suggestion would probably be to push the artistic theming a little more in the desert river direction with maybe banks, that have grass that then gives way to sand and flowing water down the river. Overall though it was really fun and for me challenging

This is really neat! The concept of being a river carving a path into a desert is really strong, and the water has a strong weight and force to it thats really enjoyable. Plus, the movement is surprisingly deep (even in just remembering which way you're going to turn next) and the cactus placement is quite nice, leading to challenging but never impossible situations, and for me to take dangerous routes for a fun bend.

I do just wish there was a little more to it. Sounds would help sell the work your water visuals are already doing, and a scoring system would incentivise me to keep going back. A long shot idea, but one I would love, would be if the camera could pan out and show you the path of the river by the end.  But all that to say that I do love what's here already, and all I really want is more excuses to dive back in. Really good job dude.

Hi Santi - once you get the hang of it, this game feels super good and almost weirdly hypnotic to play. I love the design of the cactus men! One thing is that it kinda feels less like a river and more like a snake being pulled along - I wish it left behind the exact path you took, looking like a winding river behind you. I also definitely wish there were some sort of audio, even if it’s just a little thing when you switch directions. Overall though I think it’s really enjoyable!

Hey Santi! Great job getting value out of the one button. The ability to move in both directions works really well, and creates some strategic depth as you need to figure out which direction to go in, and whether its one or two presses to go that way.

To nitpick a bit on this topic, I think it might be nice if when going straight down, the arrow gives some sort of indication as to what direction it will move it next. I would occasionally forget (because I have the memory of a goldfish apparently), and I think it would just be a nice polish/QoL change.

That's pretty nitpick-y and not a super necessary thing to address though, and I really want to double down on how much I love your use of movement tied to the one button. Very clever.

There is something very enjoyable, peaceful about having the thing switch direction every time you press space. It brings me into a mental state of symbiosis, it is enjoyable. I am the river flowing, avoiding the cactus men.

I do wish there were sound effects or more of an impact of the river leaving something behind. I also wish that the background matched the style of the cactus men a bit more, along with the font at the end. 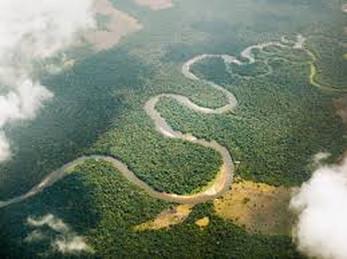